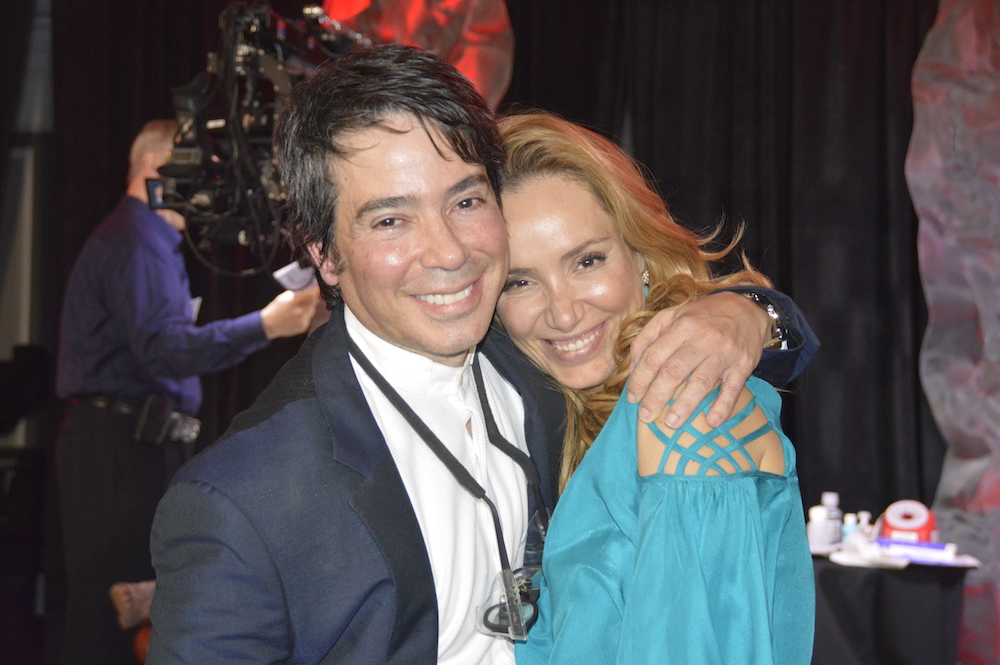 BACKGROUND Hyaluronic acid (HA) dermal fillers are commonly used in cosmetic dermatology. Due to differences in their physical characteristics, HA fillers demonstrate different sensitivity to degradation by hyaluronidase (Hase) because of HA concentration and differences in cross-linking. Similarly, there are dif- ferences in the activity of Hase products depending on source and concentration.

OBJECTIVE The primary objective was to demonstrate the differences in potency and activity of 5 Hase products when used to degrade 5 different HA products using a human in vivo model.

MATERIALS AND METHODS The study subject was a healthy, consenting adult woman scheduled to undergo abdominoplasty. Skin to be excised was injected with 0.1 to 0.2 mL of each filler (10 injections each) leaving a visible lump. Immediately afterward, the HA lumps were injected with 4 IU of each Hase product every 2 minutes until the HA lumps were no longer visible or palpable. This procedure was repeated after 30 days. Injected tissues were excised after abdominoplasty for histological analysis.

RESULTS The 5 Hase products displayed a wide range of doses and times required to completely degrade the 5 HA products ranging from <2 to >16 minutes.

CONCLUSION Cosmetic practitioners should familiarize themselves with differences in HA and Hase products.
Supported by Allergan Produtos Farmaceˆuticos LTDA, Sa ̃o Paulo-SP, Brazil. The authors have indicated no significant interest with commercial supporters.

The number of cosmetic procedures performed in the United States each year continues to grow. The top 2 minimally invasive procedures in 2016 were botulinum toxin Type A (6.7 million) and soft-tissue fillers (2.4 million). Among dermal fillers, the use of hyaluronic acid (HA) products exceeds that of all others combined, with more than 1.9 million procedures performed. Also known as hyaluronan, HA is a versatile filler that provides tissue volume augmentation for deep wrinkle correction, lip augmentation, and to improve the appearance of nasolabial folds, marionette lines, glabellar creases, and tear trough deformities. Hyaluronic acid can also restore volume to local areas such as the cheeks and temples. The versatility of HA filler products is due to their physical properties such as concentration, particle size, cross-linking, and the type of cross-linker used. Based on these properties, HA products demonstrate different physical characteristics such as elasticity, firmness, viscosity, and persistence.

Although generally safe, a variety of adverse events can occur during and after the injection of hyaluronidase. Transient local effects include erythema, edema, bruising, and pain, which generally respond to symptomatic care. Delayed inflammatory response consisting of granulomatous reactions occasionally occurs in some patients. Hyaluronic acid filler complications include misplaced injections13 or overcorrection, undesirable aesthetic outcomes, and the Tyndall effect. Although rare, vascular occlusion can cause tissue necrosis and blindness.

Hyaluronidase (Hase) is a naturally occurring enzyme that degrades HA. The US Food and Drug Administration has approved several Hase products that are used to hydrolyze HA to increase the absorption, dispersion, and resorption of subcutaneously administered fluids and drugs. Other Hase products are available in other countries. Hase is often used off-label for applications in aesthetic dermatology such as treating the undesirable effects of HA described above, including misplaced injections, overcorrection, unexpected outcomes, the Tyndall effect, granulomas and inflammatory reactions, and vascular occlusion.

Owing to differences in the physical characteristics of different HA products described above, available HA fillers demonstrate different sensitivity to degradation by Hase. Similar to HA products, there are also differences in enzyme activity among various Hase products depending on the source (ovine vs. bovine vs. human recombinant) and concentration.

The primary objective of the following study was to evaluate the differences in potency in terms of required units and activity of 5 Hase products used worldwide, when used to degrade 5 different HA products having different concentrations, cross-linking, and matrices using a human in vivo model. Other objectives were to determine the dose of different Hase products required to dissolve 0.1 mL of 2 different HA products used as volumizers having different rheological properties and also to determine any correlation between Hase dose and degradation of endogenous HA in human skin, and differences in Hase tolerability.

The 5 different HA products used in the study are listed in Table 1. The 5 different Hase products used in this study and their dilutions are listed in Table 2. This was done to standardize the dose as 0.4 IU of Hase in each 0.025 mL of solution. The only one that required a smaller volume of solution because of its high concentration was Hase-4 (Hyaluronidase 2000, Biometil Swiss, Brazil) at 0.4 IU per 0.01 mL. A healthy, consenting adult woman scheduled to undergo abdominoplasty in 6 months was enrolled as the study subject.

Figure 1. Grids consisting of 10 squares for each of the 5 HA products were drawn on the skin to be later excised during abdominoplasty. Each square was injected with 0.1 or 0.2 mL of HA filler (5 squares each) leaving a small visible lump. HA, hyaluronic acid. 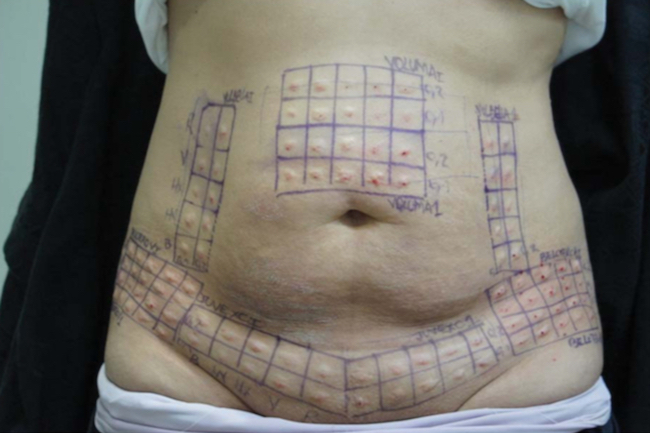 Grids consisting of 20 squares for each of the 5 HA products were drawn on the skin to be later excised (Table 1). These 1 cm2 squares were superficially injected (retrograde injection with a 4-mm needle from the sub-dermis to the dermis) using 0.1 or 0.2 mL of a filler (10 squares each) into the intradermal and subdermal layers per manufacturer recommendations, leaving a small visible lump (Figure 1). Immediately after injection, the 0.1 and 0.2 mL lumps of each injected HA product were injected with 4 IU of each Hase product (Table 2) every 2 minutes. A chronometer was used to measure the time until the HA lump was no longer visible or palpable. The 2-minute interval was used because this has been reported to be the mean duration of Hase activity. The Hase injections and time for HA product dissolution were each performed by the same investigators. This procedure was repeated after 30 days in another area reserved for this purpose.

Two days (48 hours) before abdominoplasty, 1 mL volumes of 2 fillers (HA-4 [Belotero Volume, Merz North America, Inc., Raleigh, NC] and HA-2 [Juve ́derm Voluma, Allergan, Inc., Irvine, CA]) were injected in each of six 1 cm2 squares. Immediately after injection, the 0.1 mL lump of each injected HA product was injected with 0 (control), 50, 150, 300, 600, 1200, and 2000 IU of the same Hase product (Hase-1 [Vitrase, ISTA Pharmaceuticals, Irvine, CA]). This range of Hase-1 doses is what would normally be used clinically to correct misplaced HA injections. Other injected tissues were excised following the abdominoplasty procedure. The injected areas were examined immediately after injection and again after 24 and 48 hours for signs of local reactions. The skin was then excised during abdominoplasty, and a histological examination was performed to determine the threshold dose for complete dissolution of 0.1 mL of HA-4 and HA-2. Histology studies were performed using hematoxylin and eosin and colloidal iron staining. To further determine the response of normal human HA to Hase, a pinch test was performed on each injected area immediately before and 1 day after treatment to determine changes in resistance. 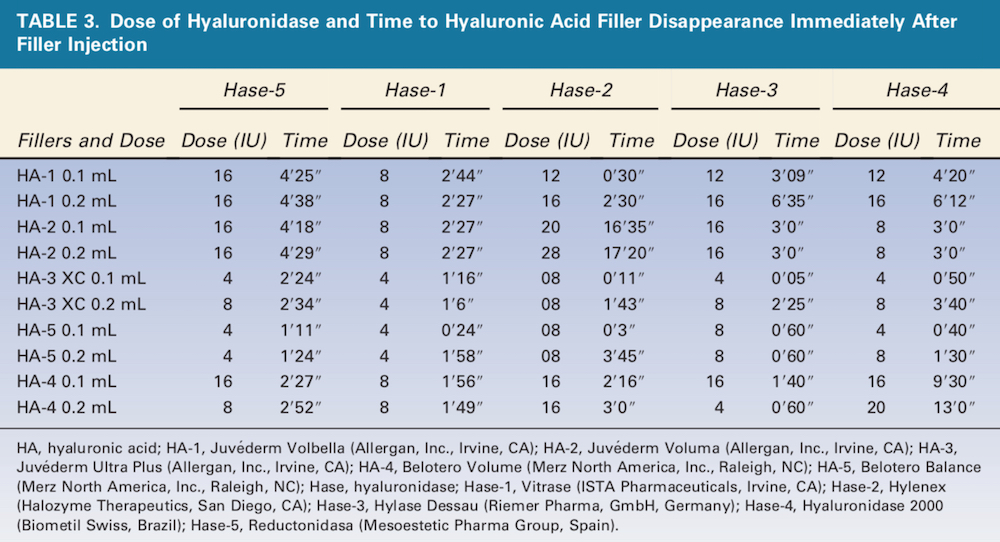 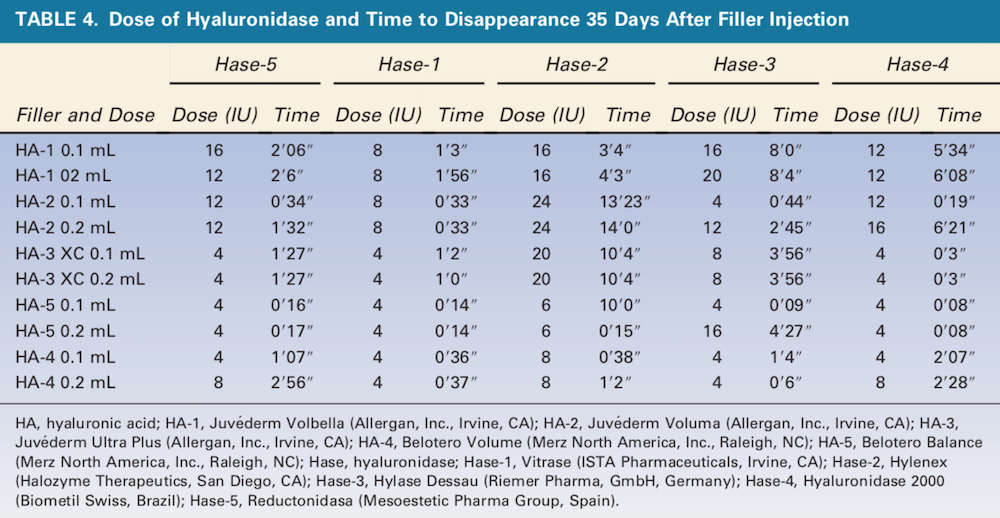 The 5 Hase products displayed a wide range of doses and times required to completely degrade the 5 HA products (Table 3). Hase-1 was the fastest of 3 products (60%), and Hase-2 (Hylenex, Halozyme Therapeutics, San Diego, CA) was the fastest of 2 products (40%), although the differences in many cases were small. HA-5 (Belotero Balance, Merz North America, Inc., Raleigh, NC) 0.1 and 0.2 mL were completely degraded by Hase-5 (Reductonidasa, Mesoestetic Pharma Group, Spain) 4 IU in less than 2 minutes, and HA-3 (Juve ́derm Ultra Plus, Allergan, Inc., Irvine, CA) 0.1 and 0.2 mL were both completely dissolved by Hase-1 4 U in less than 2 minutes. By contrast, HA-2 0.1 and 0.2 mL required more than 16 minutes after injection with Hase-2 20 and 28 U, respectively. HA-1 (Juve ́derm Volbella, Allergan, Inc., Irvine, CA) was more efficiently dissolved by Hase-1. 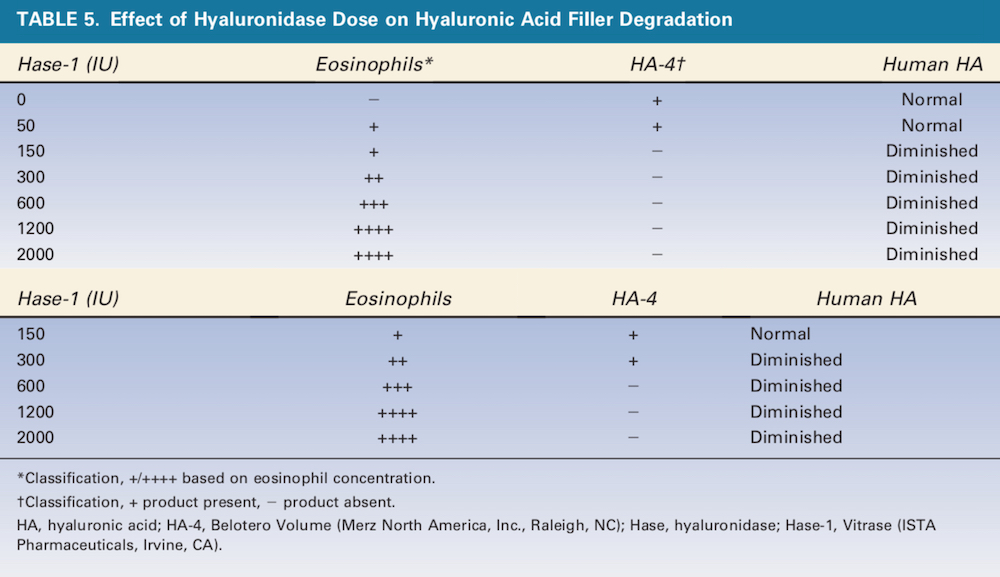 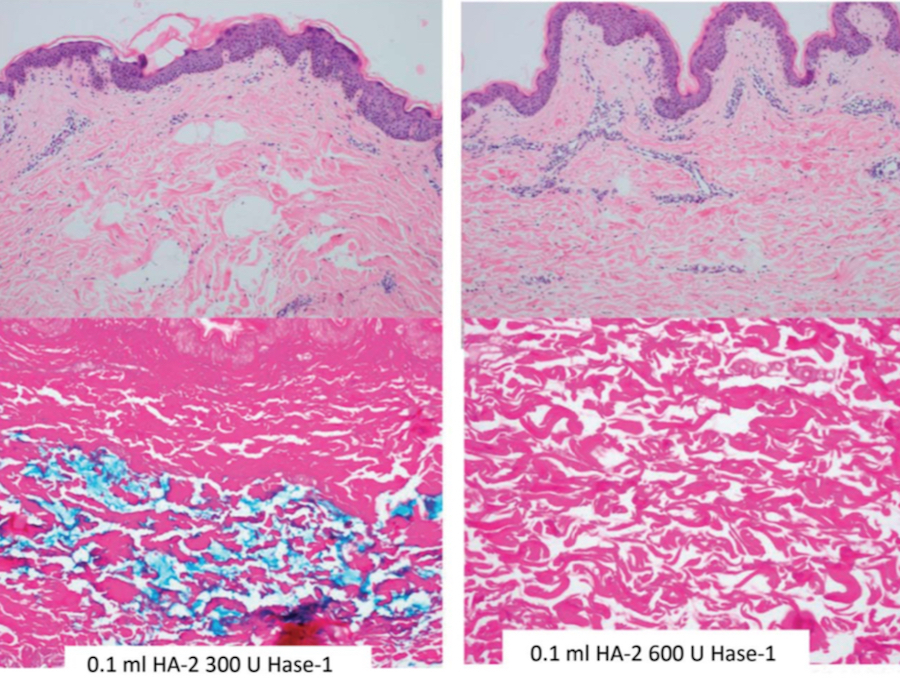 Therapeutics, San Diego, CA) was the fastest of 2 products (40%), although the differences in many cases were small. HA-5 (Belotero Balance, Merz North America, Inc., Raleigh, NC) 0.1 and 0.2 mL were completely degraded by Hase-5 (Reductonidasa, Mesoestetic Pharma Group, Spain) 4 IU in less than 2 minutes, and HA-3 (Juve ́derm Ultra Plus, Allergan, Inc., Irvine, CA) 0.1 and 0.2 mL were both completely dissolved by Hase-1 4 U in less than 2 minutes. By contrast, HA-2 0.1 and 0.2 mL required more than 16 minutes after injection with Hase-2 20 and 28 U, respectively. HA-1 (Juve ́derm Volbella, Allergan, Inc., Irvine, CA) was more efficiently dissolved by Hase-1. 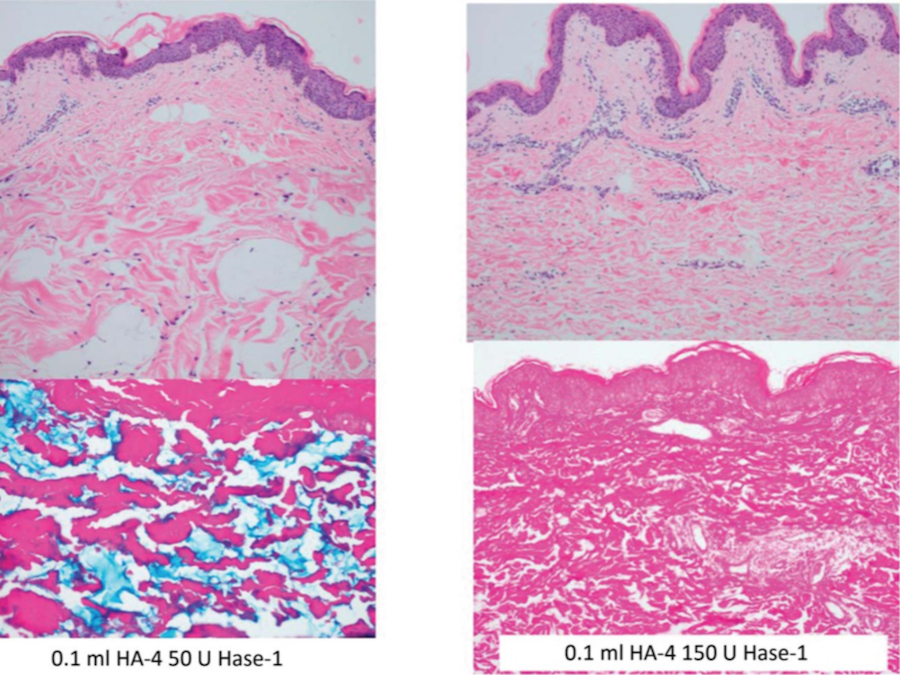 Figure 4. After 24 hours, there was a slight depression in areas treated with more than 50 U of Hase (Hase-1 [Vitrase, ISTA Pharmaceuticals, Irvine, CA], top), returning to normal after 48 hours (bottom). Hase, hyalronidase. 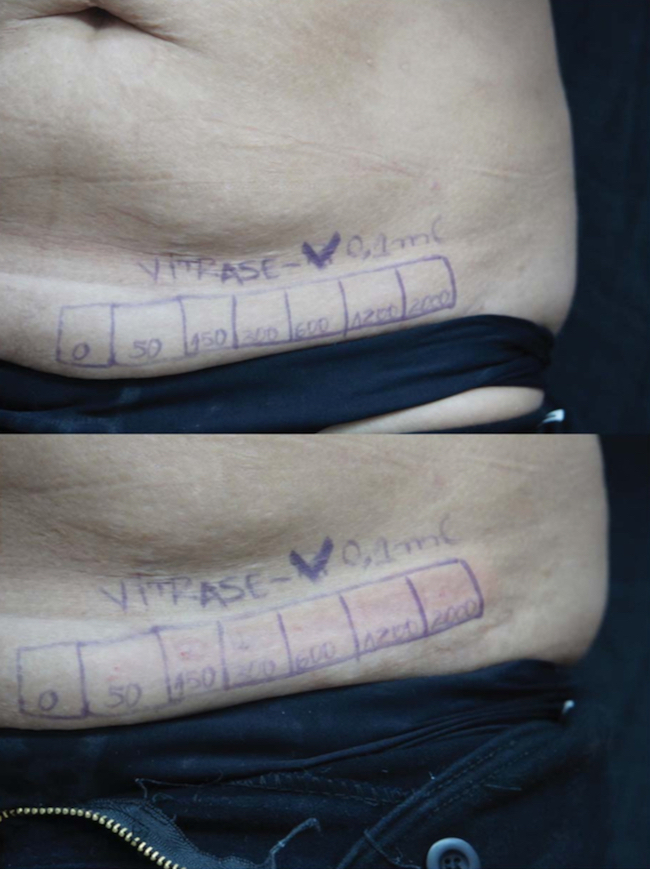 Histology results revealed the 2 HA products treated with Hase displayed dose-related increases in eosinophils and required different doses to achieve total dissolution (Table 5, Figures 2 and 3). Clinically, depressions in areas treated with more than 50 U of Hase (Hase-1) could be observed and also noted by the change in resistance to pinching. These changes returned to normal in 48 hours (Figure 4). Unfortunately, based on a qualitative comparison of biopsies (Figure 5), no difference could be detected because the hematoxylin-eosin and colloidal iron stains were not sensitive enough to detect any changes in HA; however, Hase produced dose-related decreases in HA because the pre- and post-treatment pinch test of each injected area demonstrated dose-related changes in tissue resistance. 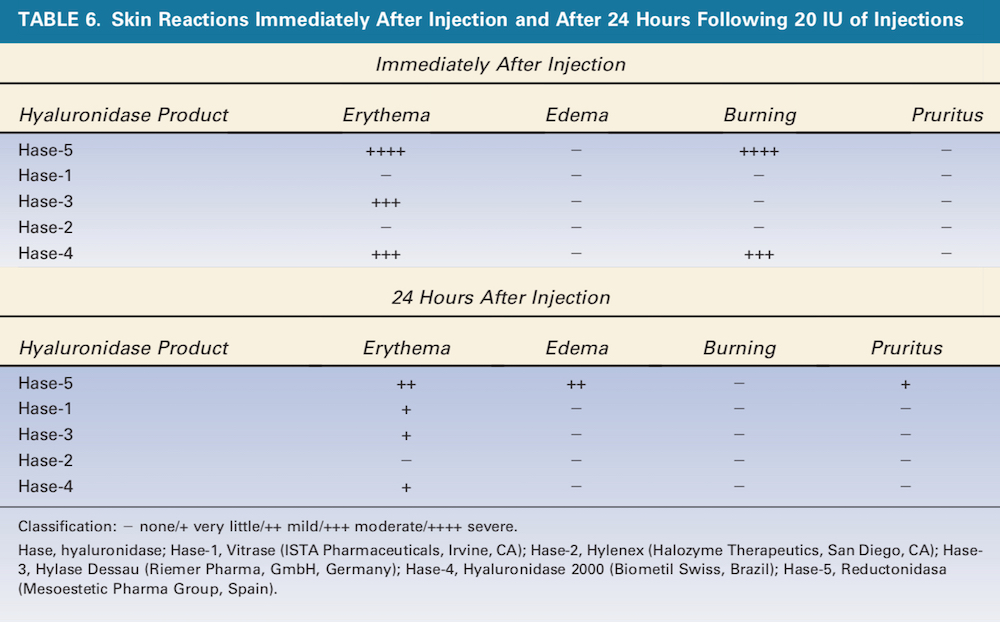 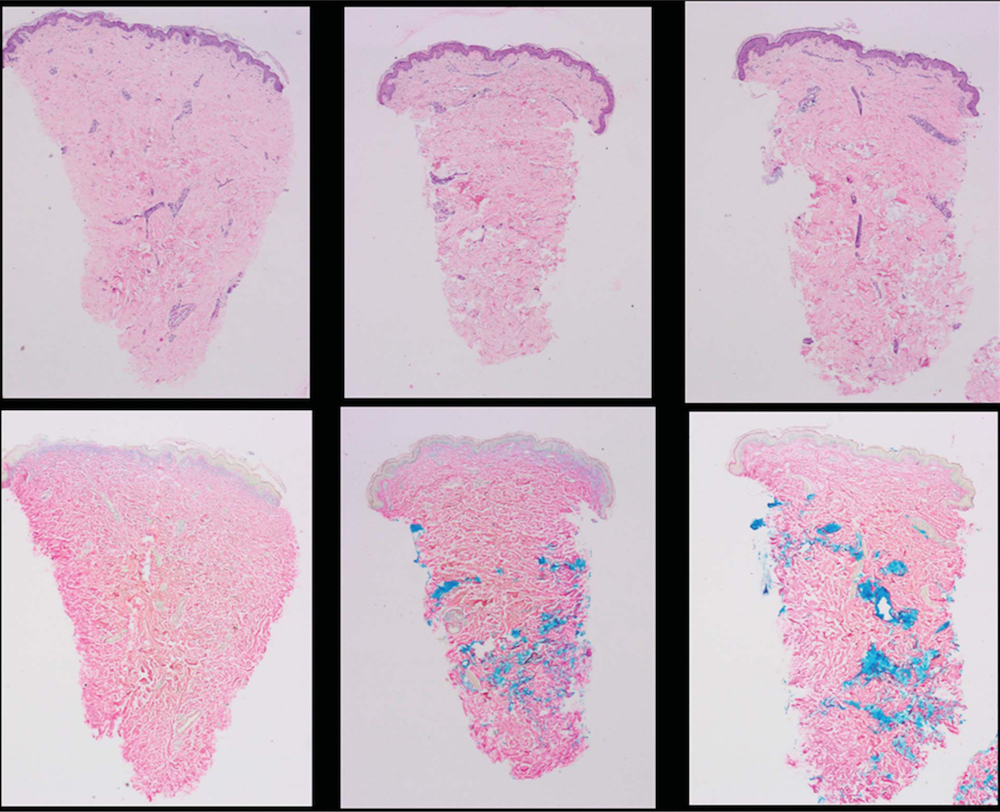 Differences among HA-containing dermal filler gel products include HA particle size, total HA concentration, the extent of HA cross-linking, and the degree of hydration, resulting in gels with different elasticity and viscosity. These properties will affect the way they behave in the skin including the amount of structural support or lift they provide. In addition to affecting the performance and durability of each product, these factors will also affect their susceptibility to degradation by Hase.

Few studies have assessed the stability of HA products when exposed to Hase. One in vitro study assessed the stability of HA products exposed to Hase by measuring the formation or concentration of N-acetyl-D-glucosamine, one of the components of the HA disaccharide units. The results showed that the sensitivity of HA gels to the effect of enzyme degradation decreased as a function of the extent of HA cross-linking. Another in vitro study demonstrated degradation times for several HA filler products increased with increasing HA molecular weights.

The study demonstrates that HA-3 (Juve ́derm Voluma, Allergan, Inc., Irvine, CA) (Vycross) is not an easily dissolvable product, probably requiring the greatest concentration of Hase and longer time for dissolution. Clinical implication suggesting that injections should be conservative in the amount injected at 1 setting. This suggests that small bolus not larger than 0.2 mL should be applied. HA-3 (Hylacross) and HA-5 (Cohesive Polydensified Matrix) have comparable sensitivity to Hase, but HA-4 is more durable because it is a volumizer and has greater cross-linking.

The results of this study demonstrate the wide range in sensitivity of HA products to the action of Hase. Similarly, there is a wide range of enzyme activity among Hase products. Overall, the ovine Hase product Hase-1 displayed the greatest activity against the range of HA products. Dermatologists who routinely use these products should familiarize themselves with their different characteristics. These differences may avoid errors in treating HA-related adverse events across various HA products because there may be a 3-fold difference in the amount of Hase required to degrade the same volume of HA. Different Hase products demonstrate different activity because the extent of cross-linking and the molecular weight of HA of each product have a significant effect on resistance to degradation.

A safety issue is the tolerability of Hase. Hase-1 proved to be the most potent and effective Hase, but eosinophilic reactions may be expected at doses greater than 150 IU. A dose higher than 300 U may induce inflammation and eosinophil recruitment, thereby increasing the risk of Type-1 hypersensitivity reactions such as urticaria and angioedema. It would be prudent to observe at-risk patients of at least 2 hours after treatment with Hase. Endogenous HA becomes diminished at Hase-1 doses greater than 300 IU.

Differences in HA particle size, total HA concentration, the extent of HA cross-linking, and the degree of hydration result in HA dermal filler gel products with different degrees of elasticity and viscosity. These properties also determine the sensitivity of these products to degradation by Hase. There are also substantial differences in the activity of available Hase products. Dermatologists should familiarize themselves with these product differences.